Evaluation of Tarsus Pigmentation in Chickens Fed with our app Colorimeter! 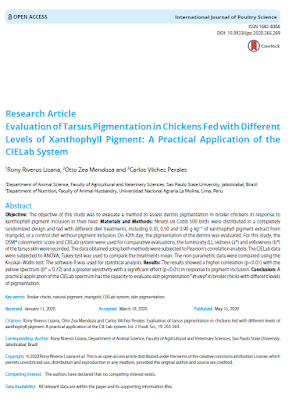 ABSTRACT
Background and Objective: The objective of this study was to evaluate a method to assess dermis pigmentation in broiler chickens in response to xanthophyll pigment inclusion in their feed. Materials and Methods: Ninety-six Cobb 500 birds were distributed in a completely randomized design and fed with different diet treatments, including 0.30, 0.50 and 0.90 g kg–1 of xanthophyll pigment extract from marigold, or a control diet without pigment inclusion. On 42th day, the pigmentation of the dermis was evaluated. For this study, the DSM® colorimetric score and CIELab system were used for comparative evaluations, the luminosity (L), redness (a*) and yellowness (b*) of the tarsus skin were recorded. The data obtained using both methods were subjected to Pearson’s correlation analysis. The CIELab data were subjected to ANOVA, Tukey test was used to compare the treatments mean. The non-parametric data were compared using the Kruskal–Wallis test. The software R was used for statistical analysis. Measurements: On the 42th day, a subjective evaluation of the degree of tarsus pigmentation of each bird in vivo was performed using the DSM® fan colorimetric method to score pigmentation by visual comparison on a scale of one to fifteen, with ascending values proportional to the degree of pigmentation, according to the indications suggested by the DSM Pigmentation Guidelines.By using the CIELab system, images were captured with a simple smartphone camera (16 Mpx.), three replicates of each reference point were analyzed by the colorimeter app version 3.5.2 (Research Lab Tools, Sao Paulo, Brazil)14, which used the pixel color variations on the tarsal surface to determine pigmentation in the real scale. The brightness (L), red (a*) intensity and yellow (b*) intensity were recorded, obtaining positive values from 0-100.
Results: The results showed a higher correlation (p<0.01) with the yellow spectrum (b* = 0.72) and a greater sensitivity with a significant effect (p<0.01) in response to pigment inclusion. Conclusion: A practical application of the CIELab spectrum has the capacity to evaluate skin pigmentation “in vivo” in broiler chicks with different levels of pigmentation.